If you would like to apply, follow the instructions on the page and fill the application form. 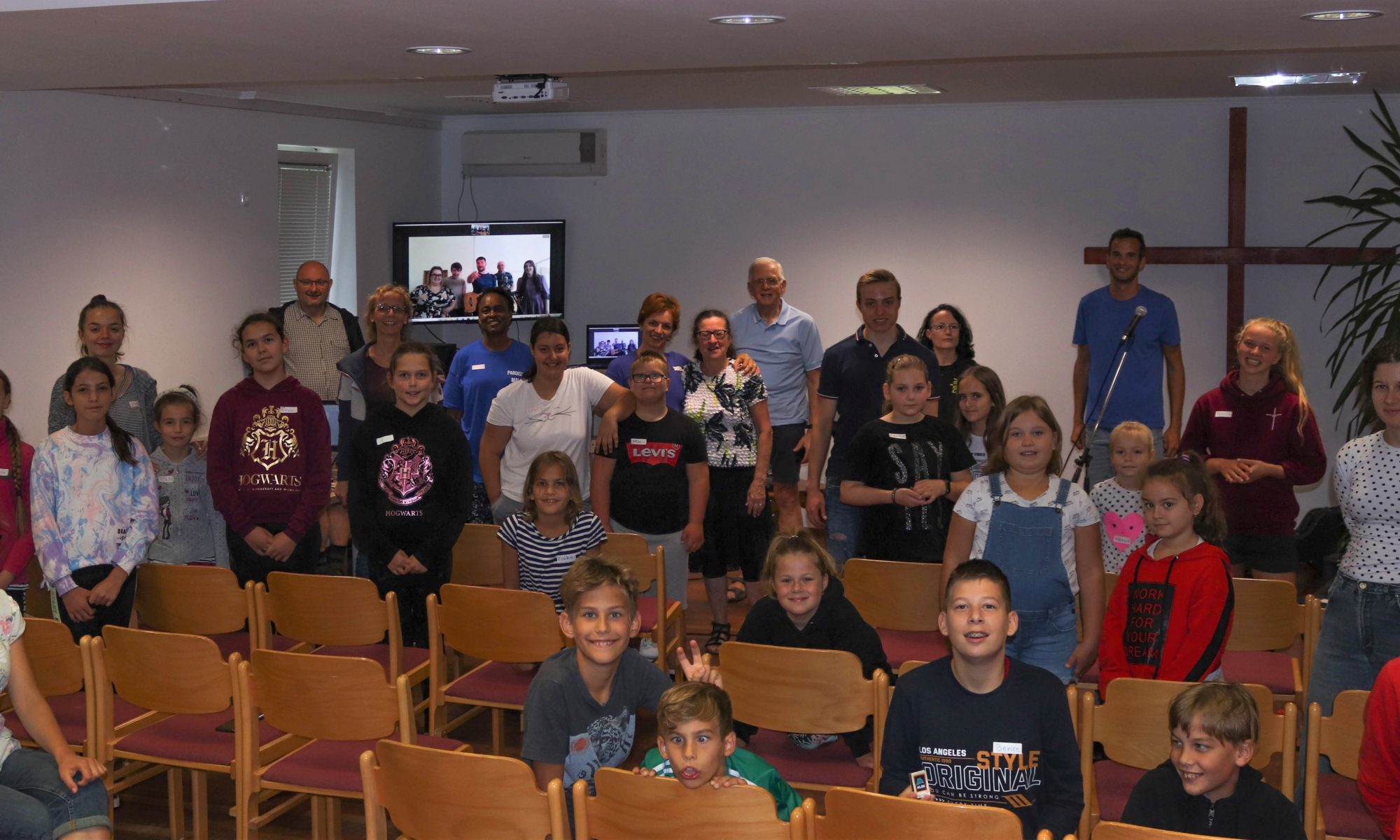 It was great for me to be back in Hungary again and to work with the local believers as we reached out to the village communities of Dömös and Pilismarót. We have developed an English programme which the local Christians have built on over the years and we praise God for the impact it has made on the lives of children, youths, and adults.

This year five of the team, Becca Williams, Chloe Cornish, Tom Binding, Zac Whitehouse, and Paul Thomas were based in Llandaff Christian Centre in Cardiff and took part each day via Zoom and a team of four, Klara Klug from Germany, Pauline Odour originally from Kenya, now living in France, Karel Ouzký from Czechia and me, from outside of Hungary were based in Dömös.

We began the day with a Hybrid Bible Study led by different team member each day. This was followed by prayer and followed by a morning of planned activities based on the life of Joseph. Initially the whole group was together and then from mid-morning we moved into “Zoom Rooms” with a leader both in Hungary and Wales. We found all the children very responsive. Each afternoon the children had a choice of 4 workshops. Art, drama, music, and English conversation. The latter workshop was run from Cardiff. On Friday, parents and friends were invited to take part in a programme with contributions from each group, including those based in Cardiff. This was followed by a picnic meal outside and many great conversations took place.

We introduced a programme for adults this year and it was a very positive experience. The topic was our Queen and we finished on Day 5, using the book published on 90th birthday of the Queen, “The Servant Queen and the King she serves.” It was a great gospel opportunity. I was able to give the few copies I had to some who attended. I would like to get more as they were much appreciated. On Day 3 we had an international evening with Klara talking about Germany, Pauline about Kenya and the Cardiff team talking about a walk they had done around the capital that day and singing in Welsh, the hymn of the revival, “Here is love, vast as the ocean” and explaining what it means.

On the last evening we had an open evening and presentation evening, and many parents and friends came. It was great opportunity for conversations and the gospel. Follow up is planned locally and by monthly Zoom meetings for both children and adults.

Pauline Odour from France wrote, “I’m grateful to God for enabling me to go to the English Language Outreach Camp in Dömös. I was a greatstep of faith for me asI had planned to visit my parentsin Kenya. My trip had to be postponed due to Covid-19. The Domos team were really hospitable and made me feel at home.

I am very thankful to everyone for all the preparation and organisation. It was well done. The team in Cardiff did an excellent job, giving the morning devotion for the team, leading songs for the children and taking part in the main programme and the breakout rooms. The Hungarian Team did an excellent job translating, editing the videos, and working in the small groups. They organized all the fun activities in the afternoon which the children really enjoyed. They were also a great help with the adult programme in the evenings

I greatly appreciated the opportunity to learn from other team members and share my personal relationship with God. I could do this not only with the team but to two of the parents Rika and Martin. I told them how I had personally come to faith and encouraged them in their walk with the Lord.”

Sally was involved with the ministry of the Philadelphia Trust from the beginning of our team service together in Central and Eastern Europe. Initially she supported her husband Paul as he played a major role sourcing food for our aid conveys to Romania and Poland in the early 1990s. As the ministry of the Trust developed and the International Camps became a key feature, Paul and Sally got more and more involved and Sally’s contribution to the planning and organisation was invaluable. She was committed to various elements of that work, resourcing many of the craft activities for the children and supporting Paul in his leadership of the provision for children. She worked with Susan and Rachel in all aspects of the management of the accommodation and hospitality for the participants.

She travelled with Paul on visits that he made to Ukraine, Poland, Hungary, and what is now Czechia. Her particular love was for Ukraine, and she befriended many of the participants in the camps and people in the churches she met there. The many tributes that came from Ukraine when she was called home bore testimony to the esteem in which she was held. The words of “Sister Maria” from Lutsk summed up Sally, “She was committed to serving God, had a deep interest in individuals and was admired because of her support for Paul in his ministry for the Lord.”

We praise God for every memory that we as a Trust have of Sally’s commitment to serve the Lord. Her care and concern for the individual has left a spiritual legacy.

The International Online Conference will be held on August 7th-12th 2021 on Zoom.

The Work of the Agape Rehabilitation Centre in Lutsk, Ukraine

Natalia and Sergiy Bolchuk were involved in a terrible, life-changing accident while serving the Lord in the south of Rivne province. A tyre burst on their minibus; no other vehicle was involved but Natalia’s injuries left her a quadriplegic. During the months of hospitalisation that followed, Natalia questioned why God had allowed such an awful thing to happen and wrestled with God as to her future.

“In God, whose word I praise — in God I trust and am not afraid”

In Psalm 56 we see David had great confidence in God. The Psalm reveals it was one of the darkest days in his history. However, we learn that not only did he trust in God, but he had confidence in Him. This should be our experience as we work through all the problems caused by Covid-19. Life has changed and will probably never be the same again, but our God has not changed. The Psalmist assures us, “God, who is enthroned from of old, does not change.” This has been our confidence as we have tackled all that we have had to face in 2020. As we were banned from travelling it would have been easy to do nothing, but praise God doors were opened and we were able to go through them. Please pray that we will be given wisdom as we step out into the Post-Covid-19 World and at the same time we would value prayer for blessing on the work we have been able to do in the past year.