I was in Hungary from 24 th -28 th May. There were two key purposes. A visit to the school in Pilismarót where the Bible Centre has good contacts and to take part in the 25 th Anniversary Meetings of the Bible Centre.

The visit to the school was very successful in that we established a school link with Hawthorn Primary School in Cardiff and that has opened up opportunities for both the Bible Centre in Dömös and for us in Llandaff North.

The head of the school wrote on Facebook, “Roger Brind has been a dear guest to our school for many years: he has encouraged me, taught English to our students, introduced them to Wales’s geography, history, and conversational practices. They understand the speech of an English native and to speak with courage. Roger is also the leader of English camps in the summer. Last week Roger Brind and Adrian Dinsmore had an English-speaking lesson for our students. Adrian Dinsmore is a school director in Cardiff. We talked about making
language learning more live by co-operating with students from an English, a Hungarian and a Ukrainian school … I hope it will be a continuation and ideas can be realized!” This opportunity will help develop the English Language outreaches in Dömös. 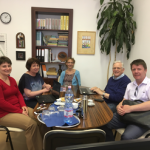 The plans for future developments are ambitious. We hope that in 2018 a school exchange can be arranged and that children from Cardiff and Hungary will be able to sample each other’s cultures and that the Christian influence will be strong as both the Bible Centre and Christians in the UK will be involved. It is possible that the Ukrainian School can be involved and we hope to involve at least one other local school here in Cardiff.

The head teacher can already see the positive influence on the teaching of English and is encouraging the children to visit the English Camp in the Bible Centre from 26 th – 30 th June when Phil Davies with Nathan and a team will be there.

The second positive is that the head wants a similar influence on the teaching of German and has asked Katrin Nagy if she can find a German School who would be willing to take part. Katrin is very keen to involve a Christian School from Dresden and so the possibilities are increasing.

Do pray for Katrin, Dani and Agi as they go through this new door that has opened. It will be more work in an already busy schedule but the opportunity this gives them and us to reach, children, parents and teachers is enormous.

The Bible Centre Ministry began 25 years ago when Gyösö Albrecht, already past retiring age bought an old printing shop close to the Danube. His plan was to turn it into a camp, conference and retreat centre. He told us at the celebration of the founding of the Centre that despite difficult times and setbacks the work had brought glory to God. It was a privilege to share in the celebrations.

Mark Davies and I represented the UK. Mark gave an appreciation from GLO and I was asked to give greetings on behalf of the Trust and the closing message. There were guests from Germany from the Weidenest Bible School and Mission House and from those involved in other areas of help from Leipzig, Herold and Langenfeld.